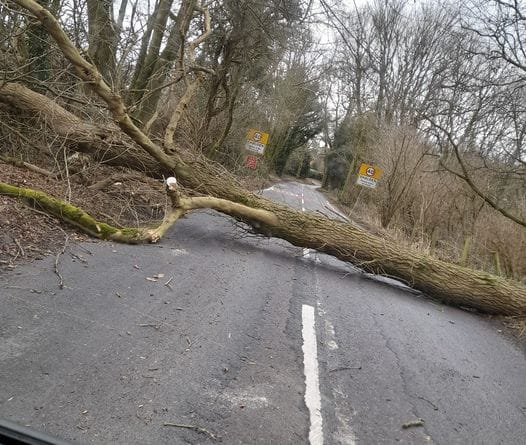 A MAN in his 20s has died after the van he was driving in was crushed by a tree in Old Odiham Road, Alton.

It is thought the man was the first person killed in England during Storm Eunice.

Hampshire Police was called at 11.49am to a collision involving a Mercedes-Benz Sprinter pick-up and a tree, reportedly outside the maisonettes at the junction of South View Rise and Old Odiham Road.

Two men, both aged in their 20s, were in the vehicle, and the passenger was pronounced dead at the scene.

The driver has been taken to Southampton General Hospital with serious injuries.

The next of kin for both men have been informed and are being supported by specialist officers.

Hampshire Fire and Rescue Service and South Central Ambulance Service also attended the incident, and a fire engine, two police cars and a JCB digger remained at the scene to begin work on removing the tree.

The incident happened on a residential stretch of Old Odiham Road, and the tree – reportedly 40ft tall – was one of a number to collapse on the same road as 80mph winds swept through the area.

According to the Daily Mirror, an eyewitness, who is from Alton and didn’t want to be named, said: “I was walking down the road when I came across the tree and I had to climb across it to get past it.

“At this point I couldn’t see anything so I was just climbing.

“When I climbed over it I saw this white pick-up truck out of the corner of my eye.

“I thought to myself ‘oh my Christ there is a car under there’ and I looked and saw the man in the cab.

“I could not believe it.”

The Mirror has also published photographs, credited to the Solent News Agency, of a white Mercedes flat-bed van being recovered from the scene show devastating damage to its cab.

Police are investigating the exact circumstances of the incident, and have appealed for anyone who witnessed the incident or who has dash-cam footage to call 101, quoting the reference 44220068638.

An inquest into the man’s death is likely to be opened at Winchester Coroner’s Court in coming weeks.

The BBC is reporting that another two people died on Friday as a result of Storm Eunice. A woman in her 30s in north London was killed when a tree fell onto her car, and a man in his 50s in Merseyside died because of flying debris.