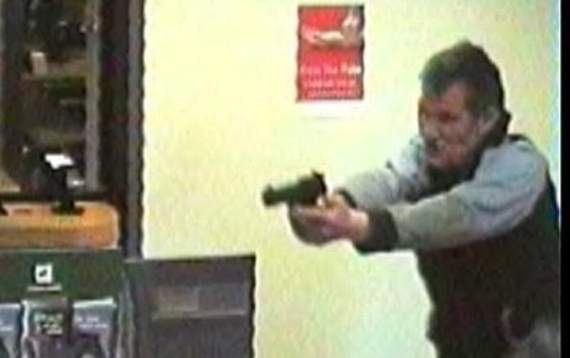 A 46-year-old man from Lindford has been jailed for sixteen and a half years at Winchester Crown Court today (Wednesday, November 2) following an attempted robbery at the Lloyds Bank in Liphook on Monday, May 16.

Officers were called at 4.10pm to reports that two men had demanded cash. One was armed with a knife and the other with an air gun, which was discharged. Both men then fled the scene, and nothing was taken.

A member of the public was injured during the attempted robbery. A 50-year-old man from Headley Down was shot with a pellet from an air gun and also received a small stab wound. He was taken to the Royal Surrey County Hospital in Guildford and was later discharged.

Today at Winchester Crown Court he was sentenced to a total of sixteen and a half years in prison.

Investigating Officer DC Kat Bird said: “This sentence will provide some amount of closure to the injured man and his wife who were both in the bank that day. Jonathan Pay and another man entered Lloyds Bank armed with a gun and a knife. When Pay approached the counter he was challenged by a customer who was paying in some money. That customer tackled Pay to the ground causing his face to be uncovered and dislodging sunglasses which later forensically linked him to the offence. The man’s wife also grabbed a bag containing gloves and a balaclava, which Pay was carrying. These items, which he had forgotten to put on, also forensically linked him to the scene.

“During the struggle a second man, who we have been unable to identify, stabbed the customer in the abdomen before Pay also shot him with an air-gun. The victim has been left with a pellet lodged in a major nerve cluster at the base of his skull, as its removal could cause paralysis to his face. Both the 50-year-old customer and his 49-year-old wife have been nominated for a Chief Constable’s bravery award for their actions.

“In jailing Jonathan Pay for sixteen and a half years the judge has shown just how seriously the courts take this kind of offence. At the sentencing hearing the judge stated that Jonathan Pay had acted in a “chilling and callous way” and that it is “clear that [he] is dangerous”.

“Thankfully nobody else was seriously hurt, and we are continuing to carry out enquiries to establish the identity of the second man involved in the attempted robbery. I’d ask anyone who could assist that investigation to contact me by calling 101 and quoting 44160184028.”