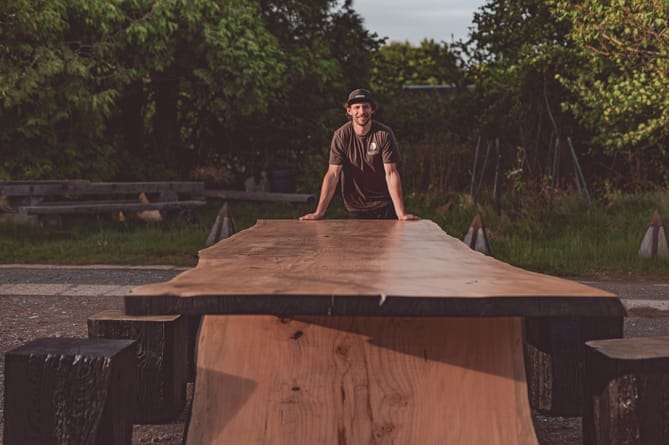 Oli Carter was commissioned to make the biggest single slab table he has made – six metres long, 1.5 metres wide.

He agreed to collaborate with Alitex at Chelsea, with his table getting on Alitex’s stand. Oli was also asked to make a sculptural bench for the show.

Oli said: “The months before the show were crazy. I had my pre-booked jobs to complete – an oak frame gazebo and timber frame barn – alongside getting the two most important pieces I have made show ready.

“It was a push working evenings and weekends but I got it done with the pieces delivered and installed up at Chelsea five days before the show.

“I just wanted the world to see this plank of cedar wood named ‘Bodelia’ after my daughters Bodhi and Aurelia.

“Zoe Ball had a seat at it. She was lovely and gave me a shout out on Radio 2.

“It was incredible to be part of a five-star gold trade stand award with Alitex, and my bench won a people’s choice award.”