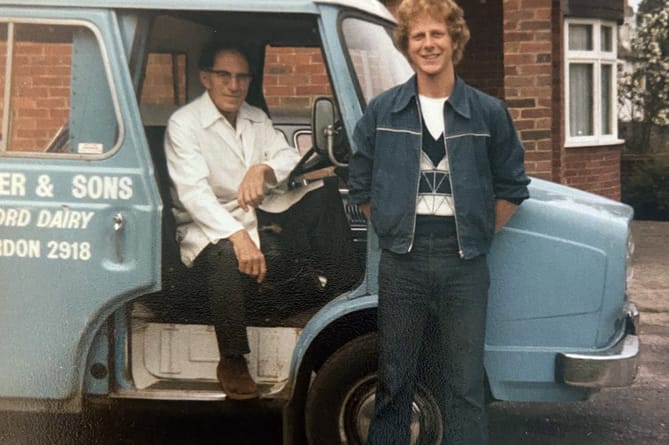 MILKMAN Robert Souter retired on December 31, 2021, bringing to an end more than a century of the Souter family delivering milk to the residents of Lindford.

Milk deliveries started in 1919, in the days when the family had a dairy herd. They milked the cows and delivered the milk around the village by horse and cart. The cart was loaded with churns and the milk was ladled out and measured in pint jugs.

But when bottled milk became the accepted way of delivery the whole process changed. Milk was collected in churns from the farm every day, taken to the depot, pasteurised, bottled and returned to the farm in crates. The crates were loaded on to the flat back of the cart and the milkman and horse made their way around the village leaving bottles instead of jugs.

Robert’s father Bill began his rounds with horse and cart as his father had done. The horse, Tommy, pulled the delivery cart until 1959 when it was mechanised. Robert’s mother Marion Souter went out helping with the deliveries.

Bill finished milk deliveries in October 1983, by which time he was delivering to the Deadwater area in Bordon as Robert had taken over the round in Lindford. The depot moved from Bordon to Farnham and later Camberley, under Dairy Crest – which was then taken over by Muller.

Robert delivered to the residents of Lindford for more than 50 years and can remember accompanying his grandfather on the horse and cart, with Tommy the horse and Laddie the dog.

Robert always worked hard to make sure customers had their milk whatever the weather conditions or circumstances. He pulled crates in snow, delivered during the 1987 hurricane when roads were blocked, and kept going throughout the Covid-19 pandemic and lockdowns.

At Christmas the round often became a family affair again, with Robert taking over his mother’s dining room with all the Christmas goods and then spending many hours boxing up all the orders with help from his mother, his wife Wendy and his daughter Rebecca.

Robert received many messages of thanks from customers and on his last day he was greeted by balloons, cards and presents.

The gifts he received included a special retirement cushion and even a knitted milk bottle. He was also filmed as part of a documentary by a local historian.

Robert would like to send his thanks to all his customers for their loyalty and custom and for their good wishes for his  retirement.

Having spent the last 50 years getting up early in the morning, and more recently having to be awake by 1am, Robert is looking forward to just taking it easy for a while – and some lie-ins!