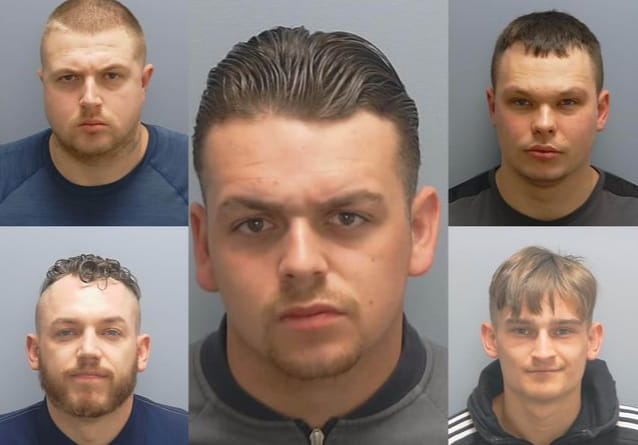 FIVE men who were part of an audacious £1.2 million conspiracy to burgle homes and blow up cash machines across Hampshire, Dorset and Surrey – including in Farnham, Headley, Alton and Petersfield – have been jailed for a combined total of more than 50 years.

The gang’s brazen spree saw them steal high-powered cars, money, jewellery, motorbikes, bicycles and even a one-year-old French Bulldog – which thankfully was returned to its owners.

They also shamelessly put people’s lives at risk in a string of 14 attempted ATM explosions, successfully managing to take money from just three machines but causing a total of £255,928 in damages and losses.

During one of the ATM explosions, a family was asleep in the flat above where the fire was started, while another led to the evacuation of a student halls of residence in Southampton.

Alton man jailed for life for the manslaughter of Bonnie Harwood

Petersfield man sentenced for sexual offence against a child

Pair jailed after ‘premeditated and brazen robbery’ at Alton jewellers

After a raid at Costcutter in Willow Way, Upper Hale near Farnham, shopkeeper Rajadurai Sasitharan told the Herald he was woken up by a “big bang that sounded like a bomb” after the gang filled the cash machine with a flammable gas and then set it alight, exploding both the inside and outside of the ATM.

In sentencing them today (Friday), a judge slammed the gang’s actions as the “worst kind of criminality”, which was “motivated by unadulterated greed”.

Ringleader David Patrick Hughes, 31, of Street End Close, Hook, pleaded guilty to two counts of conspiring to steal, conspiring to burgle and conspiring to cause an explosion. He was jailed for 17 years.

The four others pleaded guilty to the following offences:

Hughes, Jones, Chivers and Golding must serve at least two thirds of their sentence and it was ordered Matthews must serve half of his.

Winchester Crown Court heard the gang would meticulously plan the attacks on cash machines, stealing cars in the lead up to a job to use as getaway vehicles with any potential spoils.

When carrying out the attacks on the ATMs, they would break open the machine, before pumping gas in using a hose and then igniting it in the hope of causing a violent explosion to gain access to the money held inside.

In the majority of instances, the men fled the scene empty-handed, with no explosion having occurred.

However, the fires caused thousands of pounds worth of damage. And in one of the attacks, at a Tesco Express in Bishopstoke, when the ATM failed to explode, a stolen Land Rover Defender was unsuccessfully rammed into the ATM in an attempt to gain access, causing structural damage to the building in the process.

Following a series of dawn raids at addresses across the county, involving 150 officers, the men were arrested and charged for their involvement in the burglaries and explosions.

Sentencing the men today, Judge Angela Morris said: “None of you gave a moment’s thought to the danger you put those residents in or for the trauma they would suffer.

“This kind of offending involves the worst kind of criminality, motivated by unadulterated greed.

“This was only stopped by the intervention of the police.”

Judge Morris also commended the investigation team for their many long hours of work, linking together offences, accessing seized phones and using data to identify those involved and for supporting victims throughout the process.

The 14 ATM incidents were:

The conspiracy to steal charges also relate to three burglaries where high powered vehicles were stolen as getaway cars following the ATM attacks.

The conspiracy to burgle charges relate to 31 burglaries which totalled value of goods stolen and damage caused at £375,000.

The gang targeted homes, commercial premises and outbuildings, such as garages and sheds, including offences where the suspects broke into homes to steal car keys.

Brook Lane, Fareham on August 10, 2019. Two Husqvarna motorbikes and a bicycle were stolen from a double garage.

Avington Close, Eastleigh on July 8, 2019. A one year old French Bulldog puppy was stolen after suspect climbed through a ground floor window. The pup was later recovered.

Old Odiham Road, Alton. Keys were stolen from inside a home to a BMW 520. The vehicle was later recovered in Southampton.

Bells Lane, Fareham on November 20, 2019. Garage was broken into and chainsaws and aboricultural equipment were stolen.

Ruskin Road, Eastleigh on May 30, 2019. Landrover stolen but later recovered.

Commercial burglary at Clarks in High Street, Gosport on September 26, 2019. Safe was stolen but subsequently recovered.

Chapel Road, West End, Eastleigh overnight between October 2 and 3, 2019. Motorcross bike, four bicycles, an outboard motor for a boat and power tools were stolen from a garage.

Woodhall Way, Fareham, on October 9, 2019. Attempts to break into garage and vehicle but nothing stolen.

Commercial premises in The Curve, Gosport overnight between November 22 and 23. Van broken into and tools stolen.

Sutton Road, Waterlooville on December 15, 2019. A motorcross bike and a mountain bike stolen from the back garden.

Speaking after the sentencing, Detective Inspector Steve Court said: “These five men gave no thought for the residents of the homes they were burgling or the danger they were putting people in when exploding ATMs.

“Their only thought was to feed their own greed, no matter the cost, both monetary and emotionally, to the hard-working business owners whose properties they damaged, to the residents’ of the addresses they burgled, and to the family who thought they had lost their beloved pet.

“As an investigation team, we have dedicated many hours to tracking down the gang and ensuring we can prove their involvement.

“They thought they were above the law, that they could steal with impunity, but let this serve as a warning. We will catch you.”