Villagers in Farringdon need money to save 2,500-year-old yew tree 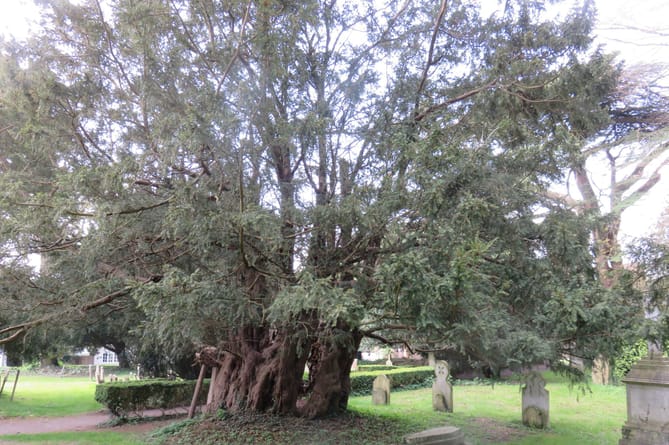 VILLAGERS in Farringdon are appealing for help to save its 2,500-year-old yew tree.

The ancient tree is at risk of collapse, with several sections now giving considerable cause for concern.

A campaign started by villagers in 2020 to raise funds for a support structure to keep it alive for future generations has raised more than £5,500, but they need to double that amount. The aim is to complete the structure by the end of this year.

The English yew is one of Britain’s oldest species, with the ages of ancient and veteran yew trees ranging between 1,000 and 3,000 years old. The total number of yew trees in this category is now in the hundreds and no other country in the world exceeds this figure.

In the Diocese of Winchester there are eight ‘ancient exceptional’ yew trees still growing in churchyards and in the whole of Hampshire there are 27, the second highest concentration in Britain.

The Farringdon yew is considered by arboriculturists to be one of the ten most important trees in the UK and it is recorded in the Ancient Tree Inventory as a tree of National Special Interest.

Classified as ‘ancient exceptional’, it measures 30ft 6in at its narrowest point and can be found close to All Saints Church in the heart of the village. It is a popular stopping-off point for ramblers and visitors to the village.

The English yew was held sacred by ancient cultures and religions in pre-Christian times. Because of their longevity and ability to regenerate – old drooping branches can root and form new trunks – the yew tree has become a symbol of death and resurrection.

It is possible that All Saints Church was built on a pagan site of worship or a burial ground. Yew trees are commonly associated with such sites. What is certain is that the Farringdon yew pre-dates the arrival of Christianity and the Roman invasion.

The campaign, initiated by the All Saints Parochial Church Council, has been successful in raising funds from East Hampshire District Council, the South Downs National Park, the Woodland Trust, Farringdon Parish Council and Farringdon residents.

But the complex nature of the support structure required has meant that more funds are required in order to complete the project and save the tree for future generations.