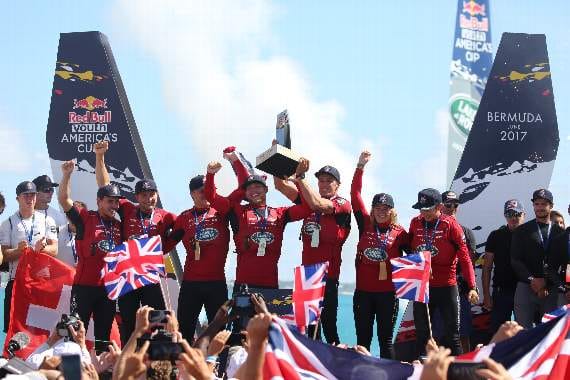 The British entry completed 12 races against 12 other nations on Bermuda’s Great Sound to take the title – six initial qualifying races and six in the finals – and finished the event with 50 points, just two points ahead of second placed New Zealand Sailing Team (48 points) and eight points ahead of Switzerland’s Team Tilt (42 points).

“All their hard work, commitment and dedication over the past 18 months has really come together on the water in Bermuda.

Alpha Trampoline Club gymnasts have a bounce in their step

“I have been really impressed by the team’s constant on-board communication, how they kept their cool under pressure and really delivered on the boat handling during the tricky conditions.”

The British entry is also made up of some of the country’s top sailing talent, aged between 19 and 24 years old, and led by skipper Rob Bunce. Twenty-three-year-old strategist, Annabel Vose, was the only female crew member to compete in the Youth Cup.

Land Rover BAR sailing team manager Jono Macbeth said: “Land Rover BAR believe in investing and mentoring the next generation and alongside our long term aim to win the America’s Cup for Britain, we will continue to nurture home grown talent to ensure a lasting legacy and sustainable future for young sailors.

“We had success promoting Neil Hunter from junior to senior team and we can only look forward to more talented young sailors moving up and forward in their sailing careers with us.”