Demand for allotments is growing at huge rate 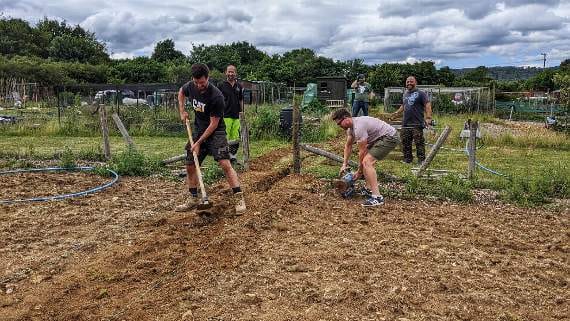 New allotmenteers putting up rabbit fencing before taking over their plots

Both Sheet Parish Council and Petersfield Town Council manage allotments – but they have fast-growing waiting lists.

Steve Amos of Adhurst Estate Allotments said: “Quite clearly the environmental debates pre-Covid-19 and then the many global challenges forced upon us by the pandemic has encouraged many to revaluate their lifestyles and eating habits.

“So when both councils asked if we could help reduce their rapidly-growing allotment waiting lists, it was a no brainer – of course we would try to help.”

Since the very first allotments were established in 2012, the creation of as many additional plots as possible had been planned.

These would go in a field between the Phase Two development and the Petersfield Community Garden.

But until now, demand had been low and the recent surge of numbers wishing to be added to the respective waiting lists has been a surprise.

Steve added: “With the full support of the councils, my neighbour and I reached out to all on the waiting lists.

“We asked them if they would like to explore the possibility of acquiring a new plot on land that, to our knowledge, had a number of years ago been used for turf growing.

“The field is now full of flints but despite that, the response from more than 36 families was an emphatic yes.

“I emphasised how much time and effort would be required to get the plots into shape and then maintain them and yet none dropped out.

“I could sense how they were already taken by the gardening bug.”

Through Councillor Nick Drew and Lucy Whittle from East Hampshire District Council, funds were secured to have the field ploughed – generating even more flints – and fencing posts and wire were bought.

Next came the allocation of the plots with names and plot numbers.

The field could hold only 20 allotments, so ‘winners’ were drawn out of a hat, and consequently about 15 potential allotmenteers were disappointed.

With that done, the newcomers got involved in putting up rabbit fencing around their new plots.

After it was up, a welcome message by one long-term allotmenteer to the newcomers read: “The instant camaraderie and teamwork were a joy to behold.

“Over the past couple of weeks, with everything that I have seen going on in the US and the UK – and the depressing news, which I no longer follow – plus the many challenges we all face with dealing with Covid-19, my faith in humanity has been ebbing away.

“You all – not only those who got stuck into fencing, but also those I spoke with after the work had been done and those intending to help tomorrow – have restored that faith. Thank you!”

For more information about the allotments of Waterworks Lane in Sheet, visit the Facebook page at www.facebook.com/